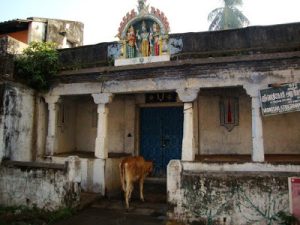 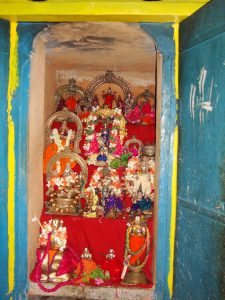 SrI perumAL kOyil vAdikEsari azhagiya maNavALa jIyar mutt is an important institution in our sampradayam, which was established by periya jIyar kOyil selva maNavALa mAmunigaL Himself, and succeeded by His prashishya ‘vAdikEsari azhagiya maNavALa jIyar’ (shishya of paravAsthu bhattarpirAn JIyar – who was, in turn, one of the ashta diggajas of mAmunigaL). It is located in chinna kAnchIpuram, right behind perumAL kOyil – opposite to the eastern rAjagOpuram (the regular entrance to varadarajar kOyil is on the western side).

The mutt has had a jubilant history with many learned scholars donning the Acharya pItam, including the mAthAmahar (maternal grandfather) of kanchI mahAvidwAn SrI U.Ve.PB annangaAacharya swAmi (popularly called ‘shashti jIyar swAmi’). Historians have shown with ample proof that the jIyar swamis in the lineage of this mutt have carried out many great kainkaryams in the divyadesams in and around kanchIpuram, including tUppul, tirupputkuzhi, etc. The jIyar swamis of this mutt have also been the ‘kOyil kELvi’s (chief administrators of the temple) at perumAL kOyil for a long period. The mutt also boasts of many shishyas from places far and wide.

It is said that when maNavALa mAmunigaL visited kAnchipuram for the second time in 1420 A.D. after taking to sanyAsam – in order to discourse on SrI bhAshyam, He needed a mutt to stay. That is when this glorious mutt was built. Later, maNavALa mAmunigaL appointed one of His prashishyas (disciple of His disciple) as the caretaker of the mutt, who was later to become the “kELviyappan” of perumAL Koyil. That happened to be azhagiya maNavALa JIyar, who was the disciple of paravAsthu bhattarpirAn jIyar. The Acharya in this pItam was later awarded with the title ‘vAdhikEsari’ (probably due to His debating skills), which has been traditionally affixed to the names of the jIyar swamis down the generations. Thus, the glorious Acharya lineage in the mutt began with the auspices of none other than maNavALa mAmunigaL Himself!

Many people think that SrI vAdikEsari azhagiya maNavALa jIyar – the first pItadhipathi of the mutt – was same as the shishya of periyavAchchan piLLai (who was also named vAdikEsari azhagiya maNavALa jIyar). However, the records of mutt show that the mUlapurushar here was different, and lived in the 15th century, contemporary to manavALa mAmunigaL Himself (as against the author of 12000 padi, who lived in the 13th century), as said above.

The kainkaryam of all the Acharyas in the mutt’s lineage to pEraruLAlan have thence continued till date, beginning right from the 1st jIyar swami who built the third prakAram wall in kAnchi temple about 500 years ago up to the 19th pattam jIyar swAmi who renovated the eastern rajagOpuram as recently as about 5-10 years back.

The Acharyas in the lineage of azhagiya maNavALa jIyar mutt have done tremendous kainkaryams to dEvaperumAL and perundEvi thAyAr of kAnchIpuram. Historians have also shown that some jIyar swamis in this lineage have also contributed liberally for the development of other divyadhEsams in and around kAnchIpuram as well (famously counted as 18 in number).

The wall on the third prakAram of perumAL kOyil was built by azhagiya maNavALa jIyar. In addition to it, many more structures within the temple such as 100 pillared maNtapam, the maNtapam in front of thAyAr sannidhi (called ‘mahAnavami maNtapam’), the extension on the western side of abhishEka maNtapam, etc. are also said to have been built by this jIyar swAmi. To commemorate such divine kainkaryams, a statue of this jIyar swAmi has been carved on pillars in the temple in various places such as in mahAnavami maNtapam, thAyAr sannidhi (Unjal maNtapam), 100 pillared maNtapam, etc.

Historic records show that the jIyar swAmis in this lineage have donated many lands/villages for the income of the temple in order to conduct the various uthsavams regularly, as early as in the 14th to 16th centuries. One such village that was donated to the temple was in the name of the jIyar Himself, called ‘azhagiya maNavALa jIyar puram’ in those days. Nowadays it seems to be called ‘pogaipakkam’ (near Arakkonam).

Temple inscriptions in kAnchi also show that the shishyas of azhagiya maNavALa jIyar have built certain maNtapams and prakArAs in deepapraAasar sannidhi and maragadhaavalli thAyAr sannidhi at tUppul at the behest of the jIyar swAmi.

The jIyar swAmi who held the pItam during the 16th century is also said to have donated a certain ornament to dEvapperumAL, called ‘nIla vandu padhakkam’. Also, a person by name ‘vEngatAdhvari’ seems to have donated diamond studded crowns called ‘vEngAtadri (vEngatAdhvari) koNdai’ to namperumAL of SrIrangam and dEvaperumAL of kAnchIpuram. This vEnkatAdhvari is said to be the shishya of azhagiya maNavALa jIyar. Even to this day, one can see the room where he lived within dEvaperumAL temple to conduct his kainkaryams (right next to sEnai mudaliyar sannidhi). It was somewhere around that time (around the late 15th or early 16th century) that the azhagiya maNavALa jIyar swAmis in the lineage are said to have been appointed as ‘kOyil kELvi’s for perumAL kOyil.

A certain stone inscription from the 16th century seems to indicate that the chariot of varadaraja perumAL was donated to the temple by the famous ruler krishnadEvaraya of vijayanagara empire. There, he is said to have consulted azhagiya maNavALa jIyar for His opinions and suggestions on the route that should be taken by the chariot. The shishyas of the mutt seem to have served in various capacities in the courts of Vijayanagar and Mysore kingdoms. The jIyar swamis themselves are also said to have guided the rulers as their ‘rAjaguru’s for some time.

In earlier days, dEvaperumAL seemed to travel all the way to mahAbalipuram for the pArvettai uthsavam. Since that was quite far from the temple, and also due to the fear of dacoits at later dates, azhagiya maNavALa jIyar – who was the kOyil kELviyappan – decided to change the destination. He then identified a village close to kAnchi, which was only about 15km away from the temple, on the banks of pAlar river (near thiru-mukkUdal). Inscriptions show that this place was hence called ‘jIyar puram’, which later came to be called ‘chIvaram’. Today, it seems to be called ‘pazhaiya seevaram’. jIyar swami is said to have built a maNtapam atop a hillock in this village. Even to this day, dEvaperumal goes to this maNtapam for pArvEttai and returns. This happens in January every year (kanu pArvEttai utshavam).

The jIyar swAmis in the lineage of this mutt are said to have been highly learned scholars in both Sanskrit and Tamil vEdantAs. One jIyar swAmi in this lineage is said to have compared the similarities in the tenets expounded in SrI bhAshya of swAmi (emperumAnAr) and the first two tiruvAimozhis of nammAzhwAr (uyarvaRa and vIdumin dashakams), and composed a grantham named “SrIbhAshya-dramidaugha-aadya-dashakadvaya-aikakanthyam”. Even the grandfather (mAthAmahar) of kAnchi mahAvidwAn SrI U Ve prativadhi bhayankaram annangarachAriar swAmi is said to have donned the AchArya pItam in this lineage. He was popularly called ‘shashti jIyar swAmi’. SrI PBA swAmi is said to have mastered all commentaries of purvacharyas from shashti jIyar swami in his early years.

Some of the well-known jIyar swAmis in this lineage (as noted in a book called ‘SrI kAnchi azhagiya maNavALa jIyar madaththin varalARu’) are: EchchambAdi rAmAnuja jIyar swAmi – who is said to have given 18 temples in and around kAnchi a facelift, thirunArAyaNapuram anantanpiLLai akkArakkani rAmAnuja jIyar swAmi, chinna vinjimUr swAmi – known for His expertise in SrI vachana bhUshaNam, periya vinjimUr swAmi – who is said to have envisioned ubhaya vEdAntham in His dream, and shashti jIyar swAmi – a scholar par excellence and the grandfather of SrI PBA swAmi – among others.

Apart from these, there is also a branch at Bangalore near Seegehalli on Magadi main road.

The thirunakshathrams of known jIyar swAmis are being conducted on an yearly basis. They are as given below:

The names of the twenty jIyars who headed the mutt previously – along with the prakritam swAmi – are as follows, in that order (note: the records and even the paramparai thaniyans show that the jIyars who headed the mutt between 15th and 17th centuries were mostly called by the same name, so one would find the same name repeating in the first few places). Their thaniyans and tirunakshatram/thIrtham details are also given, where the information is known authentically: 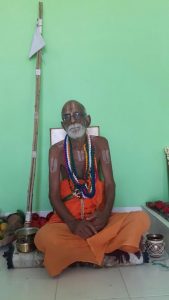 NOTE: The order given here could not be found in any written records. However, this order was deduced based on the order of occurrence of the names/deeds of jIyars in the paramparai thaniyans of the mutt. 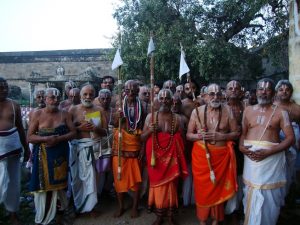