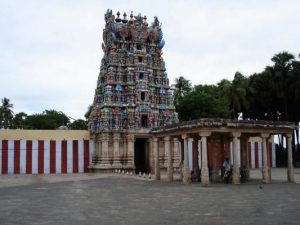 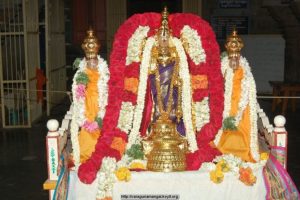 emperumAn is in a seated posture in this dhivya dhESam facing east. mUlavar is known as vijayAsanar (one who is seated in victorious throne) and he is seated along with varaguNa mangai nAchchiyAr and varaguNa valli nAchchiyAr. uthsavar is known as em idar kadivAn (one who removes my troubles). yOga narasimhar sannidhi is also present in the temple facing west.

A brAhmaNa named vEdhavith performs great thapas (penance) to please SrI mahAvishNu and being pleased by his efforts, to give dharSan to him, the lord appears as vijayAsanar in this dhivya dhESam.

Subsequently, the great rishi rOmasa was staying along with his disciples in this dhivya dhESam. Once a fisherman while fishing the temple pushkariNi gets bitten by a snake and dies. His soul ascends to svarga immediately. A disciple named sathyavAn observes this and asks his guru “What puNya has he done to ascend to svarga?”. rOmasa explained “Previously, this hunter was born as the son of the king of vidharba. Initially he was righteous. But when he grew up, due to bad friendship, he became evil. After he died, he suffered in hell for long time. Subsequently, he was born as a hunter, hunted many animals and suffered for that too. Eventually, due to the previous puNyas, he was born in a fisherman family in this varaguNamangai dhivya dhESam and have now died from here. Due to losing his life in this holy abode, he attained svarga”. 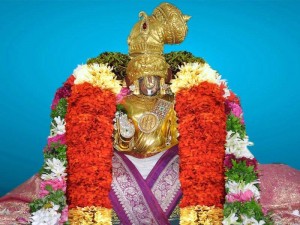 Near by City: Tirunelveli

How to reach: Train, Buses, Autos, Taxis available from Tirunelveli/Srivaikuntam to thiruppuLingudi 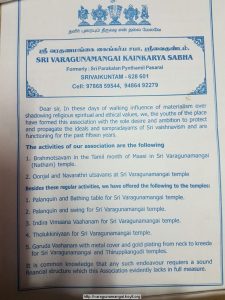 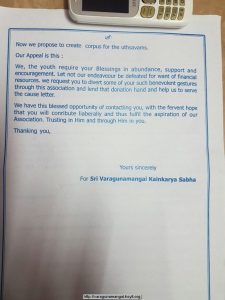