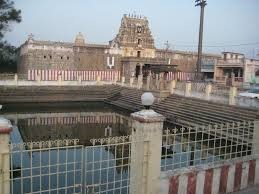 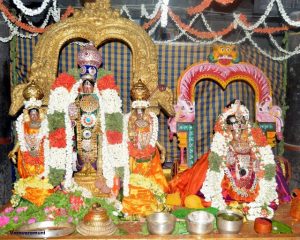 thirupputkuzhi is one of the dhivya dhEsams in thoNdai maNdalam (kAnchIpuram-chennai region). thiru – auspicious, puL – bird (jatAyu), kuzhi – burial pit. jatAyu mahAraja (vulture king) fights with rAvaNa in attempting to rescue sIthA pirAtti. In the process, he gets fatal injuries, falls down and is breathing his last moments when SrI rAma arrives there. SrI rAma becomes deeply overwhelmed with with emotions on seeing jatAyu in his last moments. SrI rAma considered jatAyu mahAraja as his father and at once granted him mOksha. It is a rare manifestation of supremacy by SrI rAma who by and large manifested a humanly character throughout his avathAram. SrI rAma then performs jatAyu’s last rites (as he would do for his own father).

In this connection, a beautiful incident is narrated in the lives of our pUrvAchAryas. It was the times in SrIrangam when nampiLLai was leading our SrIvaishNava sath sampradhAyam in a glorious manner. Once naduvil thiruvIdhi piLLai bhattar (a descendant of kUrathAzhwAn and who was a little bit jealous on nampiLLai‘s glories) was going to the king’s court. He meets pinbhazhagiya perumAL jIyar (who is a sishya of nampiLLai and was incidentally was born in this thirupputkuzhi dhivya dhEsam) and invites him along to the court. When they go to the king’s court, the king asks naduvil thiruvIdhi piLLai bhattar to explain how SrI rAma could give mOksham to jatAyu if he was simply manifesting humanly character. bhattar was perplexed since he could not think of a reasonable explanation reconciling SrI rAma’s human behaviour and benedicting jatAya mahAraja with mOksham. The king gets distracted with some administrative tasks at that time. bhattar turns around to pinbhazhagiya perumAL jIyar and asks him how nampiLLai would explain that. jIyar says “He would explain this through ‘sathyEna lOkAn jayathi‘ slOkam”. bhattar being a scholar at once understands the meaning. This slOkam explains that a truthful person will rule over all worlds – since SrI rAma being the most truthful he was able to send off jatAyu to paramapadham (which is the spiritual world). The king returns in the mean time and enquires bhattar for the explanation. bhattar explains the principle and the king is amazed by the explanation. He honors bhattar with lots of wealth. bhattar rightfully goes straight to nampiLLai along with jIyar, offers the same to him and tells him that the huge wealth was a reward for the few words of explanation of nampiLLai. He then becomes a dear sishya of nampiLLai and serves him then onwards. This is a nice connection between this dhivya dhEsam and our pUrvAchAryas in-depth knowledge in sampradhAyam matters.

thirumangai AzhwAr has performed mangaLAsAsanam to this dhivya dhEsam emperumAn in his periya thirumozhi and periya thirumadal.

There are several sannidhis and uthsavams that happen for the emperumAn, AzhwArs and AchAryas in this dhivya dhEsam.

kainkaryams are done through Maragathavalli Sametha Sri Vijayaragava perumal trust (MSVRP trust). Trustee of this trust can be contacted through 9445214825.