thirumazhisai is the avathAra sthalam of thirumazhisai AzhwAr. This kshEthram is historically called as mahIsAra kshEthram. mahisAra means mahimA (greatness) sAram (essence) – essence of all greatness. It is also known as madhya jagannAtha kshEthram. 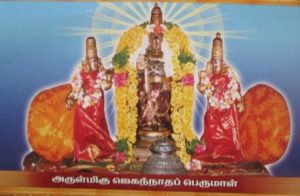 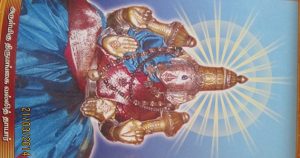 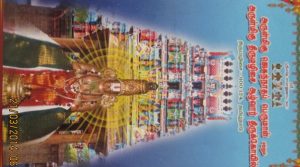 After the birth of thirumazhisai AzhwAr (also known as bhakthi sAra yOgi) as the son of bhArgava rishi, this kshEthram becomes to be famously known as thirumazhisai.

When the assembly of rishis were meditating on the best place to perform their thapas (austerities), they compared the glories of rest of the world with mahIsAra kshEthram (thirumazhisai) in a measuring scale. The side which had the thirumazhisai’s glories lowered and was established as the greatest place in this world.

This incident is also explained as follows:
Once many brahmarishis (great sages) such as athri, brugu, vasishta, bhArgava, etc., went to sathyalOkam and asked brahmA “Of the many planets, bhUlOkam is the best place for performing thapas (penance). We are thinking to perform penance there. In bhUlOkam, which is the best place for such penance?”. brahmA then gets the measuring scale and keeps mahIsAra kshEthram in one side and rest of the world in the other side. The side which had thirumazhisai lowered highliting that it is greater than the entire bhUlOkam. The rishis saw that and become astonished about the glories of this small town in comparison to other places. brahmA spoke “As you can yourself see, mahIsAra kshEthram is the best place for your penances. So you all go there and perform your penances that will fulfill your desires”. The rishis then arrived at mahIsAra kshEthram and performed their penances and were greatly blessed.

Such is the glories of this great kshEthram.

Thanks to thirumazhisai srIkAnth swamy (parichArakar) for providing the details