thiruppullANi kalyANa jagannAtha perumAL sannidhi is located near the famous rAmar sEthu – the bridge that was built by SrI rAma along with the vAnara sEnai (monkey army). 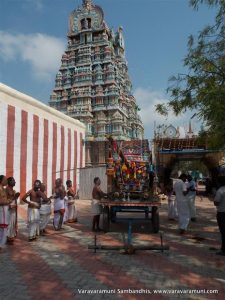 The presiding deity in this temple is kalyANa jagannAtha perumAL. He appeared to give divine vision to pullAraNya rishi. jagannAtha perumAL was dearly named by dheiva chilai (Godly/divine form/deity) by thirumangai AzhwAr. 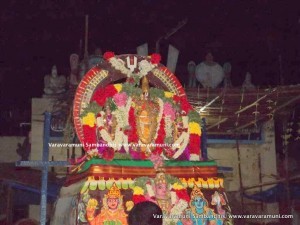 SrI rAma, as part of his mission to rescue sIthA pirAtti from rAvaNa, arrived at the beach near the samudhram (ocean) separating bhAratha dhEsam from lankA. On the advise of vibhIshaNAzhwAn, he places a dharbhai (grass), lies down on it, performs saraNAgathi (surrender) to samudhrarAjan (king of ocean) and requests him to facilitate building a bridge to cross-over to lankA. He stays there for 3 days like that and samudhrarAjan does not come out. SrI rAma becomes very angry and vows to drain the ocean. samudhrarAjan realizes his mistake and appears at once in front of SrI rAma. He begs for forgiveness and offers to facilitate the construction of the bridge over his ocean. In memory of this incident, SrI rAma is present in this dhivya dhEsam as dharba sayana rAmar (one who is reclining on dharbha). It is said that Adhi sEshan himself took the form dharbha to be emperumAn’s bed. We can recollect poigai AzhwAr’s “chenRAl kudaiyAm” pAsuram in this connection, where AzhwAr says, wherever emperumAn goes, Adhi sEshan will follow him and serve him in many ways. 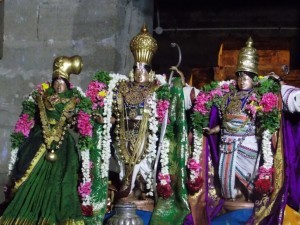 In the case of SrI rAma’s saraNAgathi, saraNAgathi itself was performed by SrI rAma in the most humble way. But SrI rAma who is the saraNAgathan here, while may present himself humbly, he is the supreme controller (who is capable of everything). And samdudhrarAjan, though he is capable within his capacity to fulfill SrI rAma’s desire, he did not oblige immediately. Thus, this saraNAgathi failed due to non-satisfaction of the required qualities of saraNAgathi. vibhIshaNa saraNAgathi also happens at this place in the beach (close to the sEthu samudhram). This kshEthram is rightfully called saraNAgathi kshEthram.

thirumangai AzhwAr manifested divine attachment for this jagannAtha perumAL and glorified him in his periya thirumozhi and periya thirumadal pAsurams.

We too can take shelter of emperumAns, AzhwArs and AchAryas in this dhivya dhEsam and be divinely blessed.

First, inside the temple there are several emperumAns and AzhwArs/AchArys.

Beyond this list, outside the temple, following sannidhi is present. 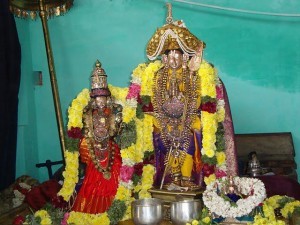