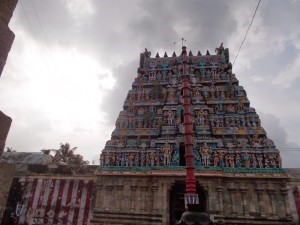 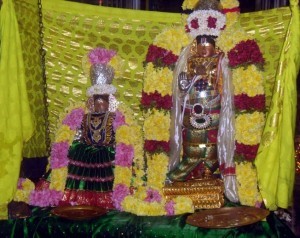 It is said in the sthala purANam that bhakthavathsala perumAL (mUlavar) appears here and blesses rOmasa rishi and varuNa. thAyAr is named abhishEka valli thAyAr. This dhivya dhEsam is also known as sapthAmrutha kshEthram – highlighting the relishable nature of the temple, vimAnam, maNdapam, forest, saras (pushkariNi/tank), kshEthram, river (cauvery) and the town. In the thAyAr sannidhi there are two small pits in the north and south side of the sannidhi walls. There is a large number of bees that live in a beehive in these pits. They stay in the north side during uththarAyaNam and in the south side during dhakshiNAyaNam. It is said that the dhEvas themselves have assumed the form of these bees and stay here to worship thAyAr and perumAL in this dhivya dhEsam.

thirumangai AzhwAr performed mangaLAsAsanams to this emperumAn in his periya thirumozhi, siRiya thirumadal and periya thirumadal dhivya prabhandhams. AzhwAr hails thirukkaNNamangai emperumAn as “perumpuRakkadal” – an ocean which is bigger than all other oceans that are visible to us. bhagavAn is generally explained as an ocean of auspicious qualities – here bhaktha vathsalan means one who shows vAthsalyam (motherly forbearance) towards his devotees. This vAthsalyam is glorified as one of the most important qualities of emperumAn.

A divine event that happens in thirukkaNNamangai dhivyadhEsam is highlighted in periya thirumozhi 7.10 padhigam where in the last pAsuram, thirumangai AzhwAr says to emperumAn that he can become his sishya and learn the meanings of his thirumozhi pAsurams. To fulfill those words, emperumAn becomes periyavAchchAn piLLai (born on AvaNi rOhiNi and named krishNa) and thirumangai AzhwAr becomes nampiLLai (born on kArthigai kArthigai and named thirukkalikanRi dhAsar). periyavAchAn piLLai becomes a dear sishya of nampiLLai, learns all the essential principles (that are coming down via our AchArya paramaparai centered on SrI rAmAnuja) from him and shows great regard and affection for his AchArya.

Once ANdAn saw a dog is attacked by a person. The owner of the dog becomes very angry and fights the person who attacked his dog. They both pull out their knives and attack each other and even are ready to kill each other. Seeing this, a great realization dawns on ANdAn. ANdAn thinks “If an ordinary person who owns of a dog becomes greatly agitated and can go to the extent of killing some one else who attacked his dog just because the dog is owned by him, how would SrIman nArAyaNan who is the supreme lord feel, if some one surrendered to him is suffering and trying to protect oneself?”. Thinking this, he immediately gives up all his attachments and goes into the temple and lies down happily without any more worry about protecting himself. 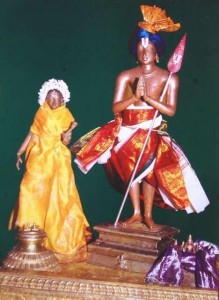